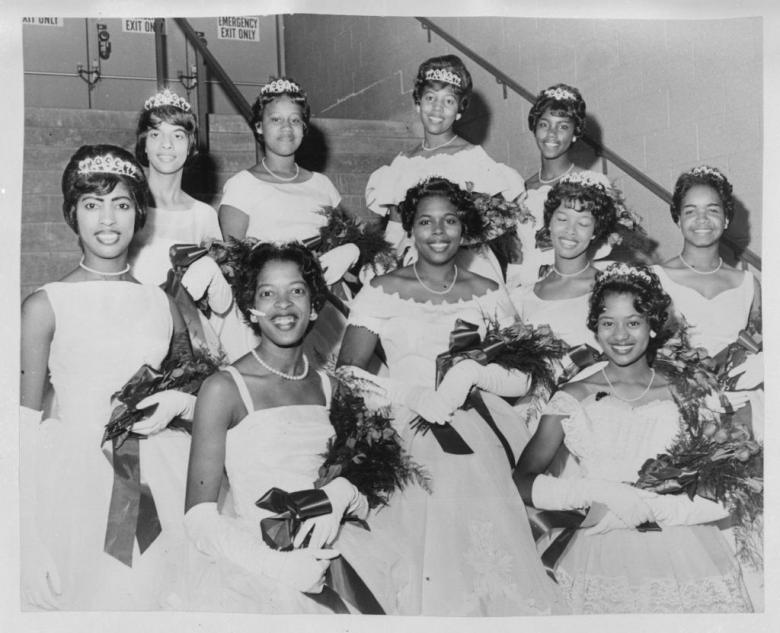 The year 1951 was historic for 21 African-American mothers who recognized the urgent need for a program to encourage growth and development of girls. Accordingly on August 8, 1951 at St. Philip’s Episcopal Church Parish Hall, these women founded Les Femmes. They established moral codes, educational standards and developed highly structured activity programs and chaperoned social functions. Each June an elaborate Debutante Ball climaxed the year’s activities and Senior girls were presented to the community.

Early Balls were elaborate presentations of girls in hoop-skirted ball gowns carrying large bouquets of roses making their debut at the Portland Masonic Temple. The late sixties reflected a changing social climate and interests. Balls were discontinued until 1979, however, the program continued and Seniors were presented scholarships. Educational stipends continue to be given. The Debutante Ball resumed in 1979 with yet another first—Mrs. Betty Stephens introduced the presentation of the Cavaliers. Prior to this time our Junior and Senior male youth, the “Cavaliers,” participated in group activities and were trained to serve as escorts and ushers at the Balls. Our presentation was so favorable that in 1987 Mr. Leslie E. Hurst became the first volunteer Director of Cavaliers. He served in that capacity until his death in 1990. The Cavaliers continued until 1996.

A unique feature of the Les Femmes program is the involvement of past Debutantes and Cavaliers to exemplify their continued growth and development. Their talents and skills are diverse; they serve as Mistress and Master of Ceremonies, Lighting Specialists, Vocalists, Workshop Presenters and support to the many ongoing activities. Notably, second generation Debutantes are participating as Les Femmes members and active supporters. Meeting needs of youth requires Les Femmes to continually develop strong programs. Program emphasis is diverse and includes: Education, Career Choices, Self-Esteem, Realities of the Workplace, Health, Realities of Drug Use, Aids, the Criminal and Justice Systems, Leadership Development, Arts and Cultural Development—to name a few, Change is constant. Knowledge of our past serves to guide our steps along the road to the future. “Through the eyes of the past comes the promise of tomorrow.” Our youth are that promise! Les Femmes cherishes the 1951 vision of those 21 founding members. They established the legacy being carried out today by Les Femmes members—committed women who are contributing their time, talent and financial support to assure that our youth will always have the option of fulfilling their dreams.

This is Les Femmes continued vision and promise!